Feminism: noun - the advocacy of women's rights on the grounds of political, social, and economic equality to men.

Afrocentric: adjective - centered on or derived from Africa or the Africans; emphasizing or promoting emphasis on African culture and the contributions of Africans to the development of Western civilization.

Radical feminism: is a perspective within feminism that calls for a radical reordering of society in which male supremacy is eliminated in all social and economic contexts. Radical feminists seek to abolish patriarchy by challenging existing social norms and institutions, rather than through a purely political process.

Lesbian feminism:  a cultural movement and critical perspective, most influential in the 1970s and early 1980s (primarily in North America and Western Europe), that encourages women to direct their energies toward other women rather than men, and often advocates lesbianism as the logical result of feminism.

Black feminism: a school of thought which argues that sexism, class oppression, and racism are inextricably bound together. The way these relate to each other is called intersectionality.

Intersectionality: the study of intersections between forms or systems of oppression, domination or discrimination.

Black Feminism and it's importance to U.S. history and society
​Written and posted by Group 2 on 10/9/15 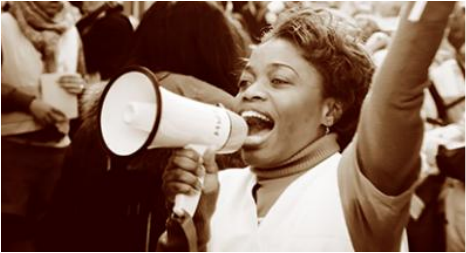 The voices of the 2nd wave of feminism have significant importance in history but within the 2nd wave, the voices, thoughts, and political viewpoints were very different from White females v. Black females and even more specifically Black females v. Lesbian Black females.. To properly identify and bring into visibility and awareness, lesbian black feminists took their political ideologies and made them publicly known and articulated.

"We are a collective of Black feminists who have been meeting together since 1974. [1] During that time we have been involved in the process of defining and clarifying our politics, while at the same time doing political work within our own group and in coalition with other progressive organizations and movements. The most general statement of our politics at the present time would be that we are actively committed to struggling against racial, sexual, heterosexual, and class oppression, and see as our particular task the development of integrated analysis and practice based upon the fact that the major systems of oppression are interlocking. The synthesis of these oppressions creates the conditions of our lives. As Black women we see Black feminism as the logical political movement to combat the manifold and simultaneous oppressions that all women of color face."